When you've got a horse, you'll finish to gave him affectives nicknames. Amira have her own, Excalibur too and it's most of the time "pony" or "calipony" or "the skunk" or the infamous "sausage pony"...

That one was not well receved at all.

Really, no one is thinking the same when it comes to nicknames... 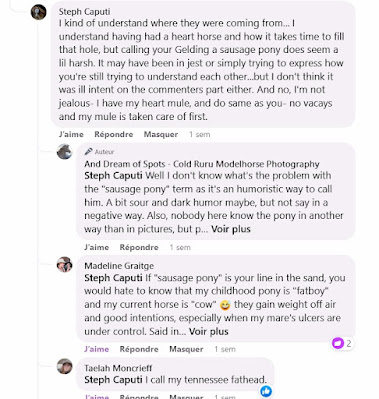 It also seems that my previous posts about Excalibur haven't been read a lot... 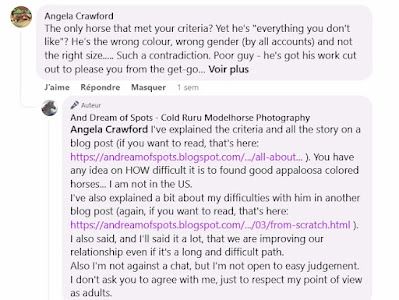 But well, let's talk a bit more about that controversial pony.
Yes I've bought him on selected criterias and then he doesn't met some of my own favorites, I said he's not what I like best not that he was all wrong (or I wouldn't have bought it to start with).

-No he's not the wrong color, I wanted a horse with spots and he's got some. Just not my favorite pattern as I'm not found of pinto and then on pintaloosa. I don't hate his color, it's just not my dream color.

-No he's not the wrong gender as far I would have loved another mare, but I did not found a mare and decided to try a gelding (my criteria was mare or gelding). What I didn't wanted was a stallion. Bad point for Excalibur, he act like a stallion even if he's not one anymore.

-No he's not the 'right' size, I was hoping a horse of the same height than Amira around 1m60 and he's 3cm smaller. Not a big deal, but definely a bit small to my taste (because now I know). What plays mostly it's that he's not BUILT like Amira so I feel the difference under saddle... A LOT. 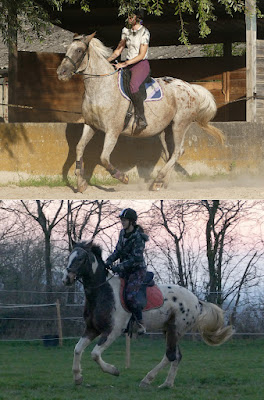 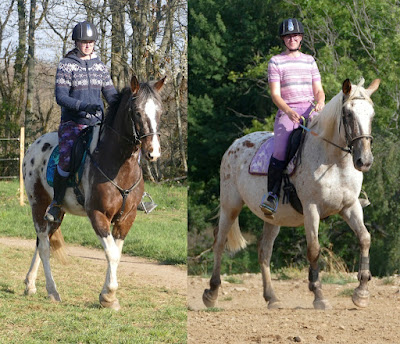 You can play the 7 differences games, go!

WHY DO I NOT GET RID OF HIM?
Because I thinks he's a living, breathing with emotions creature. And believe me, he's in need of a stable, well build relationship. We started one, it's not all rainbow and butterflies but it improves and I want to give him his chance. A real chance to have finally found his forever home. 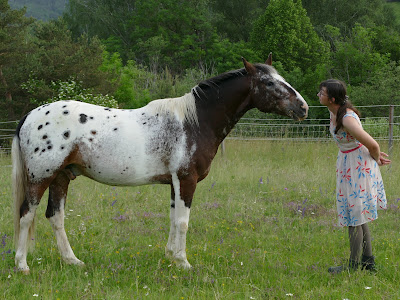 IS HE UNHAPPY WITH ME?
I don't know for sure, but he doesn't seems to be. He's not avoiding my contact, he's learning slowly and I learn back from him. I provide him a full horse life with large pastures and friends, he doesn't work every day, he's fed and cared properly. 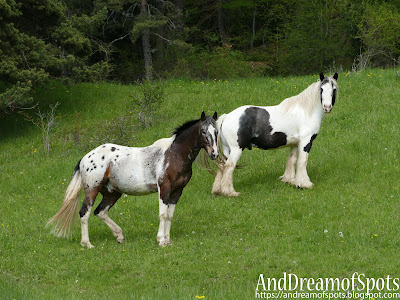 I AM UNHAPPY WITH HIM?
Not exactly unhappy. I am a bit frustrated because he's not smart, coward and lazy. I am not satisfied because he's not as good as I expected him to be and because it's in his head it's difficult to change that. But I work, really, really hard on him so he can be a better ride. He is improving, it's long... it's gonna be long. I wanted a horse that would be ready, he's not, so I teach him everything from the start. I hope it'll be rewarding. Future will tell us... I have not lost fate for the moment. 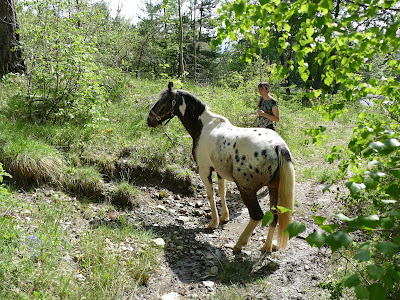 What do I know about Excalibur that push me to write "he's in need of a stable, well build relationship"?

Well he's been bred in an breeding farm that specialize in appaloosa color. His sire is a purebred appaloosa and his mother is a saddle horse with a pinto color. 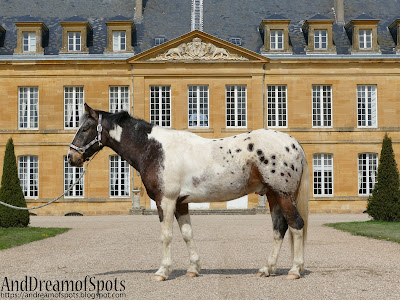 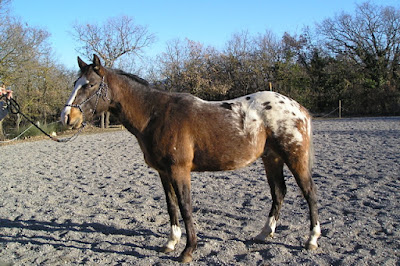 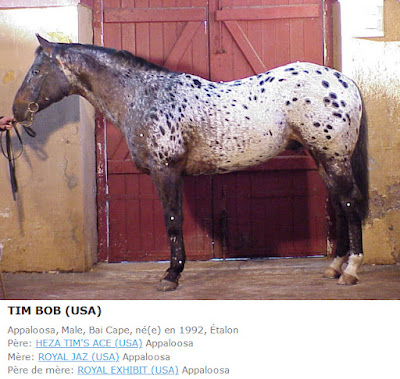 I don't know a lot about this particular appaloosa lineage, that stallion (the grandsire) was a "national stallion" in France so he did a lot of approved purebred appaloosa here.
I've spoke to someone that knows REALLY well the breeding farm Excalibur came from, and she told me none of it's parent, especially not the mother are lazy... quite the contrary. So his attitude with work does not came genetically I can said it so.

But that person also told me they were really bred "in the wild" like litteraly in the mountains, without any breeding complements so no minerals or grain or even hay.
I've found a picture of Excalibur as a young horse, and you can see he missed a bit. 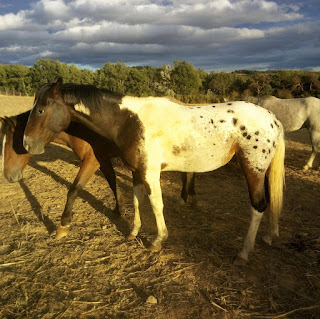 To my opinion, he have lacks of developpement you can still see on his "adult" self.
He stayed at this breeding farm for around 5 years, he was broken and ridden there. I know from a friend who's breeding mules and have seen Excalibur's breeder with young horses that's it's not the best for handling horses (not in a bad way, more in a lack of competences way - I don't judge because I don't know, I'm just writing what I've been told).

I've found AFTER buying a gelding that, in fact, he was gelded late (or bred young) as he probably used to be a stallion. He's got 3 products registered, only one alive so I don't know what happened but he got gelded anyway.
Today he still acting like a stallion, and that's kinda a pain in the ass. Let's be honest.
Excalibur is also a jerk to other horses, it is okay most of the time but I've seen him attacking violently or harass some specific ones, and that attitude was a real problem at my friend Sabrina's place. He's not easy to match in a herd. It's better to only have him with other males and keep him away of most of the mares.
It's kinda okay with Amira because she's got a strong character. 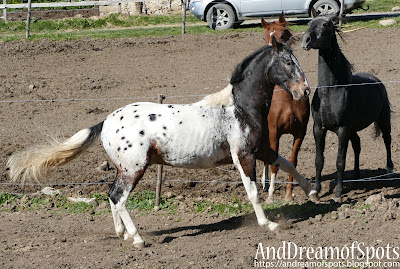 I don't know a lot about the guy that sold him to me. I know he didn't gave much better care than at the breeding farm. Both his past owners were most likely old fashioned when it comes to horses.
I feel like I got a lot of lies about Excalibur from that vendor in any case.

When I got Excalibur at home last year, he was kinda stressed with me and acting like he was feeling unsecure with me. It took me a long time to be able to touch him at certains places or to move roughtly around him without having bad reactions. He broke me some leading ropes in panic.
Now he's more confident with me, it took a long time and I've not earned all of his trust (let's be honest). As I already said, I try to heal his soul, as most of it's problems are in his HEAD.
I don't think that selling him to somebody else will help him, it'll only help me. Get rid of him and buy a new, easyiest horse.
But I really feel (I may be wrong) that he's in need to stay somewhere safe and have the secure of a reliable life... and I can gave him that, he just need to do it's part of the job! I feel like he's never got his chance to do it so.
If I sell him, I would never be sure that he'll have that.

So now are you still mad at me because I called him "the sausage pony" because he's a fat pony? Do you understand a bit more my doubts and -yes- grumble about him? In any case I am free to think wathever I want of that horse, I'm the one who know him for real.