TBT : The horse I owe

"Daddy, Mommy, I want a horse!"
It's a so classic want for a little girl, and also it was an obsession for me... when I was a child, I remember that I talked with every horses owner I met near pastures or during a walk and then when I was 10, a girl said to me "I had to wait 'till my 23th birthday you know?" and me to reply "I will have it so much before".


Horses always had been central in my life, for the first day I met one to I imagine, the last day I will live. But if as a child they were My Little Ponies and Barbie's, I always expected a real one...

Three years ago, days for days on the 3 march 2013, right after I goes back from Sabrina, I met... "the" special horse. I did know, the minute I saw her head up out of the stall... we were far, and it was just a white face and... oh I pray this horse was an appaloosa because I already felt my heart bouncing...

Oh you can't imagine how I was feeling! I did beg' the professor to have it for the lesson, but the answer was no.
But I only had eyes for her, for real... 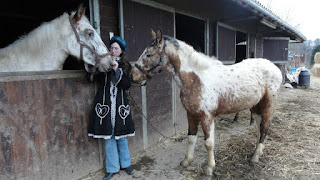 So lessons after lessons, I asked more about my heart crush, and the answer goes until I understand she was for sale. Oh, you can't imagine, I dreamed of this horse my whole life, and then, I totally decided she has to be mine.

On march 17, I get an appointment to try her, but not on her back, only on foot. My professor insist "she was not at my level". But don't mind, even if I never rode her, my decision was taken. 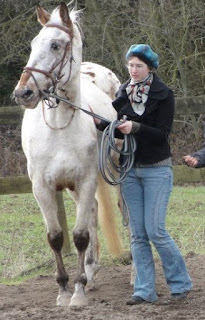 Oh yes, she was not a flashy appaloosa, she was not perfect in conformation or even baroque, friends of mine didn't understand why I decided to buy this horse. Between million of other much better looking ones... and I did had to agree she was more white than spotted... but who can explain love?

So after I decided to buy, I did my research and found a lot of things like...

But don't mind, I didn't even was scared. Even if I should...
And I officially became this horse owner on march 26th.

And it didn't turn well.
Oh yes, I know, it was evidence. I was a debutant and it was a young (4yrs) mare with a lot of temperament.


*
Right after I bough her, we goes on another much better looking stabble and it was a nightmare. My horse was kept in dark, without the permission to paddock. And she became to be out of control, so I finally had to go back on my usual riding stabble and start a long basics work...
First on foot, and then, finally on saddle!


And it was  kind of hours and hours of lessons, it was not necessarily easy. And you know, every girl that dream of their horse imagined it perfect.
It was not. Not at all.
A mulish horse with heart, but a mulish one, as I said she was 1/3 camel, 1/3 mule and 1/3 appaloosa.
Or maybe it was not a mulish horse, but just a young horse with a debutant ridder? Or maybe it was part of the two.

I did reconsider my caprice.
But it did never, got never regret. Because I had MY horse and it was my duty to raise it, found the buttons, make it work. Not just give up.


All this because, when you stop asking "why the horse" and got the point: "why you?" you can obtain... 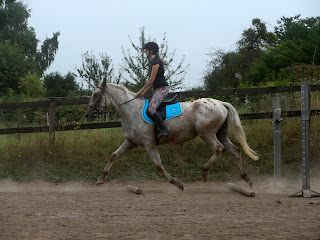 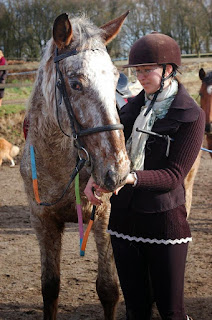 Because, beeing a horse owner, it's not only "riding" problems it's also "full horse" problems from legs to head. And I was not in the end of the tunnel, because I had to deal with... 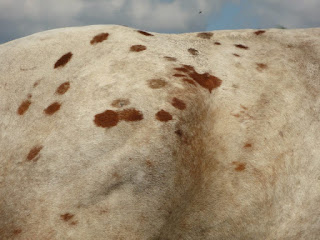 Not because she was not feeded, or anything mean people said to me, it was because my mare, this near perfect horse has... a bad back conformation.
Oh yes. And didn't know it or saw it, even if there is spots on.

It was part of my mistake, but you know, since I know how to deal with, she never had to suffer that bad again.

And then, I move on.
In life, something like moving house happend, and this time it was for another country. From Belgium to France, and I was not decided to let my horse behind.
Movings are expensive. And stressfull.
And even if some where ready to buy my horse, I was not ready to let her go. It was MY horse, the one I had a crush on, the one I conquest hardly, the one I love.
The "new life" offered us a second start in a way, still the same routine... 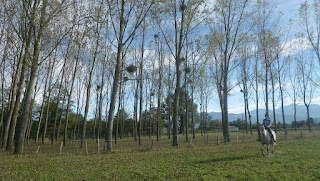 It's kind of a great development no?
My though is, having a horse is way more worries than anything, but it worth every hours of doubts, every minute of pain, every second of regrets. Because, in the end it's pure joy. And that's why any of us will never gave up on horses. 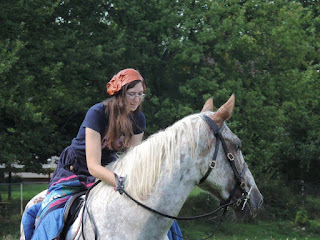 If only I could talk to the little girl I was, explain her all she had to go though and why she didn't have to be sad about "not getting a horse immediatly"!

And if you are this little girl, or if you didn't have got your dream horse yet, please don't be impatient, because "this" horse is somewhere, waiting for you to be ready!
Special "Thanks a lot" to Sabrina, who helped me in such a lot of ways from the start!