Stupid confinement pictures - Behind the Scene.

One day, I woke up, wonderin' myself "what if" for this month shooting, I'll do pictures inside, pretending I'm outside.
Don't get me wrong, I can, actually goes outside as I've got a garden with lots of space in it, fact is that I've already done so much pictures in this exact garden that I feeled, I needed to be more creative than that.

I wanted to do a windy picture of Stomwatch, but how to figure wind in an interior? That was the challenge. The second problem I encouter was that I wished an outdoor seen from the inside behind, but well, there's light problems you cannot fight. 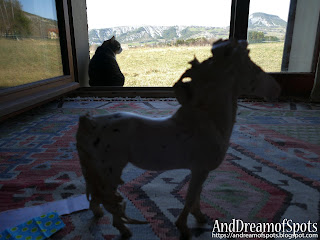 Who was incredibly popular, because it's obvious that toilet paper is the new trend. I just wanted to make a jump and it was the perfect material. 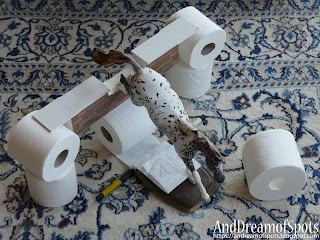 At the exact moment I shutted the door entry with my fences, everyone wanted to go out... of course, that fat Lady wasn't in the mood to jump and destroyed it. I had to do a take two on this.
Difficulty may come from everywhere. 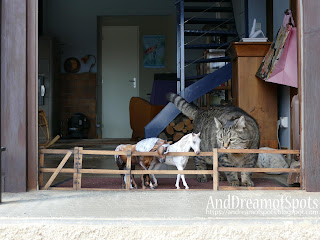 I wanted to picture some water splash, as it's a classic - they are so popular, but well on the inside it doesn't work that well. Bathtub are really hostile environnement.
I laughed so hard doing this one btw.
But please, do not waste water at home, water is precious. 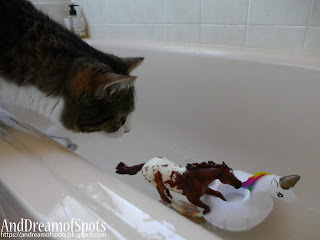 Because cats just involved themselve that much in the process, I wanted to picture a cat. But of course, when I tryed to choose Lady for a change on my casting, she just ran away at the exact moment I putted the horse next to her. Luckly, Darjeeling isn't as coward and posed perfectly.
Maybe a little too much perfectly. 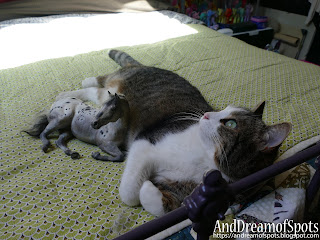 When I was a child, I got a shelve where every case was a box for one of my Barbie Horse. I played the game by putting them hay and water in.
Today both my bookshelf and Barbie horse cabinet are full but I wanted to redo the same things I would have done as a kid with it. 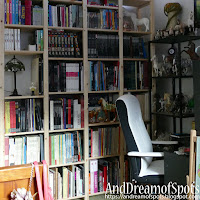 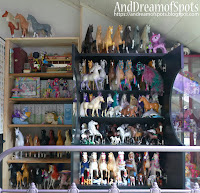 Well, they are day like easter, where you usually got chocolate figure. But not this year, because of the confinement. So I must admit, that's the sensitive point.
I'm currently disgusted and doesn't found a funny idea.

I'm not sure if I'll run another week of thoses, but I hope you liked it.
Posted by ColdRuru at 12:07
Envoyer par e-mailBlogThis!Partager sur TwitterPartager sur FacebookPartager sur Pinterest
Labels: BoD Project, IRL