All began when Sabrina got a call, asking if she -as a riding centre- would have a white horse to lease for a filming. I was riding my mare, and just listen "I've got a globally white one here, with just little spots on it". When I understand a bit later it was about a history show, I was like "I want my mare to go there".

So the next day they called again, asking for a beautiful horse, no matter the colour. Sabrina explained back "so I've got two, did your actors actually can ride, because one of them could not really be ridden by everyone" (she was speaking of her own horse, Quirian). But I was like "Take my mare, she is better for a history show, take my mare, I want my mare to do somethin' historic because it's (really) one of my dreams" and I had arguments like "I've got a baroque bridle" or "Appaloosa spotted horses were on the top in historics times"

And in the end, we decided that my mare would be better, because she's an easy ride. So we sent a picture of the "almost white but with spots" mare and they loved it.

That's how, my mare used to run for "Secret d'Histoire" (History Secret), a french tv show, documentary type, speaking of great historic figures.
The show is pretty popular here, and celebrate 10 years on TV, that's why they decided to add actors to the new actual season.

When the mares arrived, they asked if she could endure a horse cover, I said she is affraid of nothin'. Plus they asked if one of us (me or Sabrina) could be stand actor for the galloping scene. Saddly for me, it was Sabrina who looked the most at the actress.
And that's how they both ended looking like... 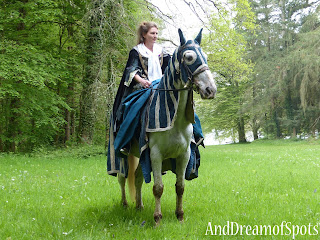 Oh my, I must admit I was green, wearing such a dress was is litteraly my own dream. But I was glad to see that once in my life instead (I always dreamed to buy such a horse cover for me, I'm now sure the mare is stunning in it).

The shot started with a long galloping scene front of the castle. 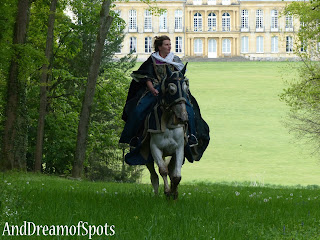 Then front of the lake. 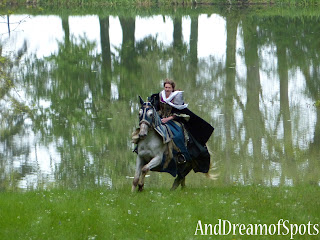 It was even more awesome than in the old "appaloosa pictured" paintings I love so much...

Then, the real actress take place for her plays. 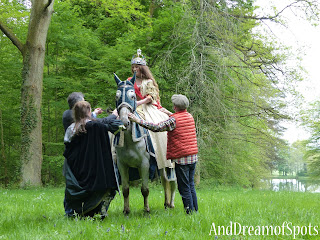 She was acting as Marie-Thérèse d'Autriche (Maria-Theresa, Archduchess of Austria, 1717-1780) acting her coronation... 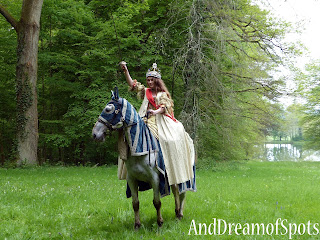 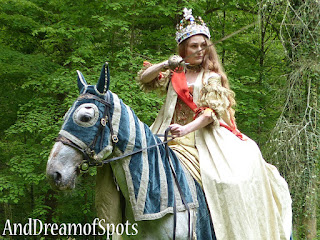 For the pictures I could find, and as many of other case, the color of the horses varies, wich means I'm not sure if she has an appaloosa like in this re-enactement or a dark one like in the painting. But that's cool. And definely historicly accurate (must insist).

So it's obvious that the horse outfit wasn't accurate to baroque but more to medieval, but this horse scene beeing minor in the whole episode, it's kind of ok. The only thing I'm sure is: this was so cool. 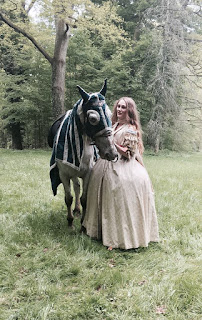 We also played another scene, but as I'm still digging to documents it,
I will do another blog post about it, promess.

To finish, here's some of the lucky castle shot I was allowed to do after all this. 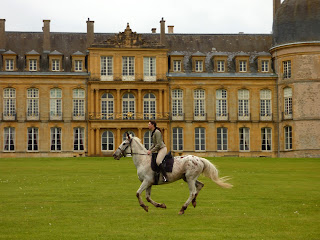 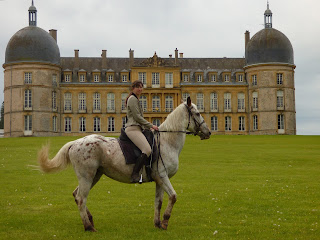 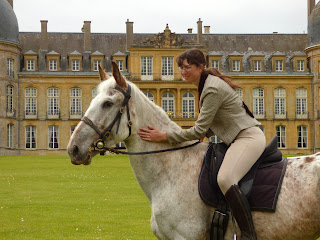 For the most curious, the episode is running on youtube until thursday 13th of july.