The Historic Spotted Horse (Part I, An Introduction)

So, as I do love both horses and art, let's explore this part of the history!


*
We don't know exactly how ancient is the spotted horse, but they were kind of evidence that's they wear on of the oldest coat, maybe before a lot of actual horse coat colours.
Searches upon a Yukon Horse confirm a certain type of colours, that are actually known as the "primitive" colours we can found on ancient breed like Przewalski, Tarpan or Fjord. But...

Pech Merle's horse, where depicted spotted. Did these drawing show us a spotted colored coat? Or is it some kind of artistic touch, as spots can be used to represent dream and visions? It's hard to decide, but there's a chance for the spotted coat! Option did exist to say yes, so do I.

But that's not all, if we search a little bit more, we can found a bunch of spotted horse thought ancient ages... Principaly in Eurasia, wich is normal, as the horses were absent of the new world before 16thc.

First domesticated horses came from a steppe region in Asia, and spotted ones were specially eye-catching to be depicted as God's, Saint or King's mount. They were "special", considered like treasure in many civilisations. The area known as Ferghana Valley (border province of Persia) became a source of supply of spotted horses in prehistoric and ancient times.

Bronze Age horses know as Ferghana Horses where depicted spotted, these horses came from actual Uzbekistan to China and Central Asia though the Han Dynasty. In fact they probably were bred on the steppes and merely bought to Ferghana for sale. These were considered as "Celestial or Heavenly Horses" for beeing faster, clever and powerfuller than other horses.

Tradition demands that these horses "sweat blood", wich is not easy to explain... theory speaks about the famous leopard complex coat that looks like drop of bloods on the fur. Sure thing is: China art did depict lots of spotted ones!

As many of civilisation, Asian horses were used for war and protection, China did take a lot of effort in cavalry to protect the Silk Road (100BC to 200CE). Exchange with the western part of the continent assured a good bloodline for their war horses.

Also, the Polo game, that came in China from Persia did encounter a great success, and still include representation of spotted horses as well.

But China wasn't really a country that bred horses, and most of them were luxury product imported from Middle East, as the polo game.

In 1220AC, Genghis Khan arrived at the source of the "heavenly horses" in conquest, and after his passage, we can be sure the Spotted genoma came in Mongolia. And so, modern Mongolian horses are still going in the spotted colour! 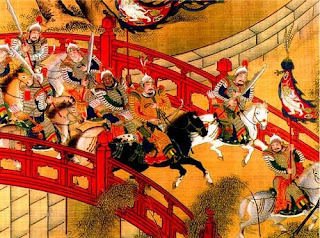 Japan not really have prehistoric horses (scientific searches discuss this theory), they should came from Corea and also probably have been crossed with southern Russia and Asian steppes horses, so that explain that their horses may came spotted too.

Persian (Iranian) tale "Rakhsh and Rostam" depict the ancestor of the spotted horses as Rakhsh, a spotted warhorse who lived around 400BC. Well know, this horse appeared to be as "roses leaves scatered over a saffron background". 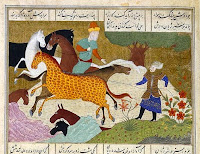 Middle East horses came originally from Mesopotamia in the early antiquity and also leave their native lands and travel during wars and commercial exchanges. The spotted coat did travel with them or maybe have been added with crosses, as the famous Ferghana horse came from a frontier province of Persia.  Fact is that many depictions of theses horses include the spots!

Spotted horses are depicted in Myceanian and Roman art. We don't know much about theses horses, but they probably also came from the Scythian (central asia tribe) during the greek wars.
Notice that the Roman are founder of the Noriker breed (Austria), that is still spotted actually.

A greek vase depicting an Amazon women... on a spotted horse, as an example, because historic Amazon (and not mythological one) came from Eurasia and were associated to the Scythian.

In the early 12thc, spotted horses appears in Spanish art and then became regular in Central Europe art too. They started appearing carrying Saints or Nobles, and then became popular.

Iberian horses are the most ancient domesticated european horses, and a recent genoma searche prove that they probably were domesticated instead of the influence of these that came from Asiatic Steppe.
Lusitanian and Spannish horses were the most famous spotted horses in west Europe, the first evidence of them came with Saint Girona Beatus commentary written in 776 on the apocalypse of St John, as one of the four horsemen of apocalypse horse is described spotted. 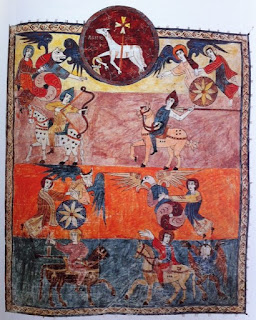 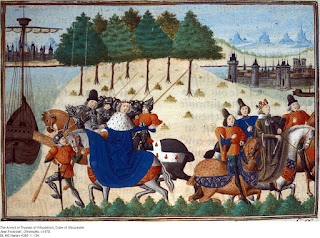 When the most northern European countries did bred heavy horses for war (steeds), in the southern, Spain still focus on breeding lighter horses, like the one they took to the New World. This particularity help to explain the success these horses had in the Renaissance, when more refined mount were asked.

In the mid. 16thc, Austria acquired a group of Andalusian horses from Spain and started to raise the famous Lippizan for the Royal Family. At these time, and as most pictures depict them, Lippizan came in many colours, including the spotted, who was the favorite. 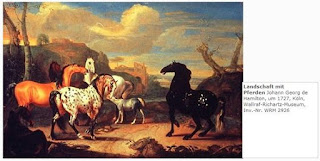 Polish reputed cavalry division under Stefan Czarniecki came to aid the Danish in 1658 with their coloured horses, as the famous spotted one Czarniecki himself rode on a couple of paintings. So the genoma came into Danemark, Sweden and Norway, as Swedish royal painting of the horse did attest. Also, Austria gave in the 17thc some of their spotted horses, but it was hard for the Danish bloodline to produce good and correct color and conformation, so the horses declined. Breed was saved by an unique mare Flaebe, who started the actual line of Knabstrupper. 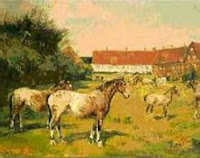 During the 17thc France's Kings, Louis XIV and Louis XV wanted to be portrayed on spotted horse, a noble thing for sure (and an amuzing fact about a horse who has different spots in every picture). In France, the "spotted horse" was called "Tigre" who mean Tiger. The historic Spannish Jennet is so also known as the "Tigerhorse" then.

As if spotted horse were popular from 16thc to 18thc, with the Renaissance as their golden age, their quote did not survive the 19thc. At these time, flashy and extravagant spotted coats loss in popularity for more sober ones. Depiction of spotted horse remain present, but not the easyiest to find. Most of them did left the Noble stable for the Circus tent. 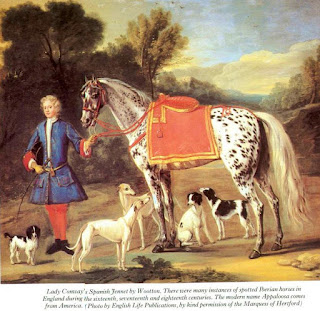 Introduced by the Spanish in the 16thc, the horse appears on the New World. On the first 16 horses imported to Mexico by Cortez, one is listed with a coat that sounds like snowflake. Ancestor of the Criollo horse, and also the famous Mustang. These horses were bred directly in the New World. Quickly, horse became prolific and Spanish breeder overmelted let some of them escape.
Those free horses that started to bred wild were called "mestengo" and ran the land until they met Indian people. After domestication, intern trade between native population gave the horse to the Nez Perce, who selected the spotted horse between many for their distinctive coat and unique "shuffle walk".
So the Appaloosa was born, to bring his name to the coat.

There's a lot to talk about this more, about each specific breed though age, about internal stories by land and countries, about -of course- the detailled history of the appaloosa. And I will do this, so I hope you liked this little introduction. I worked hard on, and tryied to be the more succint and complete.
Posted by ColdRuru at 02:30
Envoyer par e-mailBlogThis!Partager sur TwitterPartager sur FacebookPartager sur Pinterest
Labels: Appaloosa, Equestrian Lifestyle, Fine Art, History, Spotted Horse